Predicted Retirement Wave of Baby-Boomer Nurses Has Hit, AMN Healthcare Survey Shows
Pressure Will Grow on Nurse Shortages Over the Next Decade

SAN DIEGO, Nov. 7, 2017 /PRNewswire/ -- The long-predicted wave of retirements among Baby-Boomer nurses is already underway, new data suggests from the 2017 AMN Healthcare Survey of Registered Nurses released today. This news intensifies the growing crisis of healthcare workforce shortages, forewarned by recent projections from the US Bureau of Labor Statistics that there will be more than 600,000 job openings per year for healthcare practitioners and technical occupations over the next decade.

The percentage of nurses planning to retire in less than a year has risen significantly – to 27% in 2017, which is up from 16% in 2015, according to the AMN Healthcare RN survey. At the same time, the percentage who say they will retire in four years or more declined. The 2017 survey also showed that 73% of Baby-Boomer nurses who are planning to retire say they will do so in three years or less. This suggests that the retirement timetable for Baby-Boomer nurses has advanced. The number of Baby-Boomer RNs peaked at 1.26 million in 2008; since 2012, roughly 60,000 a year have exited the workforce and that number is climbing, according to recent research. By 2020, Baby-Boomer RNs will number about half their 2008 peak.

"Nursing shortages are being felt throughout the country today and they are expected to intensify as the retirement wave becomes a more significant factor.  Other macro trends, such as the rising demand for healthcare services from our aging general population and the improving economy, are creating a perfect storm for what is expected to be one of the most challenging eras of clinical workforce shortages," said Susan Salka, President and CEO of AMN Healthcare. "As the largest nurse recruitment and staffing firm in the nation, we have seen this situation growing worse for several years. Today and in the future, healthcare providers face workforce challenges that can impact patient care and organizational success."

The AMN Healthcare research on nurse retirements closely follows the latest Bureau of Labor Statistics (BLS) Employment Projections for 2016-2026, which showed that the healthcare industry will soon become the nation's largest employer. The BLS data revealed that job openings for healthcare practitioners and technical occupations will average 624,000 a year.   For non-clinical healthcare support occupations, there will be another 635,000 job openings per year.

For Registered Nurses alone, there will 204,000 job openings per year from 2016-2026, according to the BLS.  These vacancies can create a tremendous strain on the ability to deliver timely, quality patient care.

"The retirement wave of Baby Boomer nurses will create a particular drain on clinical expertise and institutional knowledge, which are critical to quality patient care and organizational success for healthcare providers," said Marcia Faller, PhD, RN, Chief Clinical Officer of AMN Healthcare.  "Our research, coming closely behind the BLS projecting an astonishing number of job openings for nurses, should be a wake-up call, because the healthcare industry will need solutions to cope with this impending crisis."

Nurse Shortage Is Getting Worse

Comparative data from AMN Healthcare nurse surveys also reflect a growing recognition from the front lines of healthcare that the nurse shortage is getting worse. The percentage of nurses who say shortages have worsened in the last five years grew from 37% in 2015 to 48% in 2017, while the percentage who said shortages are not getting worse has declined.

Comments from survey respondents reflected their concern that nurse shortages can affect quality of patient care.

As the healthcare industry becomes more complex and competitive, leadership has become increasingly important to success, and nurses have their own very clear preferences on how organizations should transform leadership. An overwhelming number – 82% – say that more nurse leaders are needed in healthcare. Nurses are somewhat disenchanted with their leaders, with approximately half saying that they don't trust their leaders, don't think their leaders care about them as an individual, and don't believe their leaders support their career goals.

However, while most nurses say that healthcare organizations need more nurse leaders, 61% said they do not want to become leaders themselves. Among Millennial nurses, though, a larger percentage are interested in becoming nurse leaders.

Nearly seven in ten nurses said that a national licensing system for nurses would be more helpful to their careers than the state-by-state system. The National Licensure Compact is already underway, and 26 states now issue multistate licenses, though the most populous states are not part of the compact yet.

The percentage of nurses who said they won't pursue further education rose slightly from 2015 to 2017, with nearly half saying their education is over. Regarding the Bachelor of Science in Nursing (BSN) degree, 16% of nurses in 2017 said they plan to pursue a BSN in the next three years, compared to 22% in 2015.The lower percentage of nurses interested in pursuing a Bachelor's degree is concerning given recent research showing that better educated nurses provide higher levels of patient care. Fortunately, a much smaller percentage of younger, Millennial nurses (23%) said they won't pursue further education, compared to all nurse respondents (48%).

The biennial 2017 Survey of Registered Nurses, which polls nurses on a wide range of career and professional topics, was completed by 3,347 registered nurses. The survey can be downloaded from the AMN website: https://www.amnhealthcare.com/2017-rnsurvey/.

AMN Healthcare is the leader and innovator in healthcare workforce solutions and staffing services to healthcare facilities across the nation. AMN Healthcare's workforce solutions - including managed services programs, vendor management systems, recruitment process outsourcing and consulting services - enable providers to successfully reduce complexity, increase efficiency and improve patient outcomes within the rapidly evolving healthcare environment. The Company provides unparalleled access to the most comprehensive network of quality healthcare professionals through its innovative recruitment strategies and breadth of career opportunities. Clients include acute-care hospitals, community health centers and clinics, physician practice groups, retail and urgent care centers, home health facilities, and many other healthcare settings. AMN Healthcare disseminates news and information about the Company through its website, which can be found at www.amnhealthcare.com. 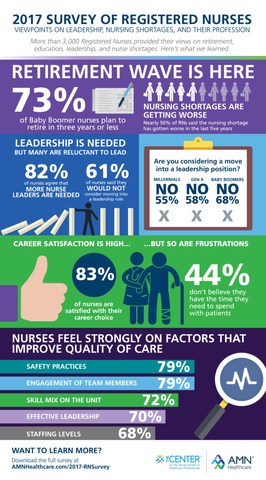